Come Fly With Them

Wherever it’s held, the Heirloom experience is always about transporting you 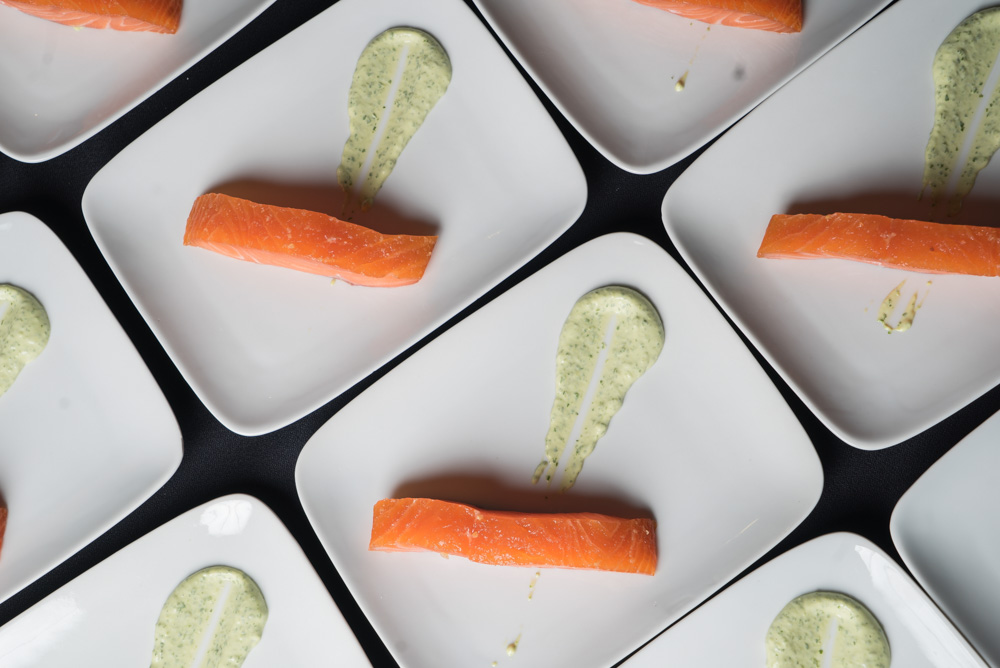 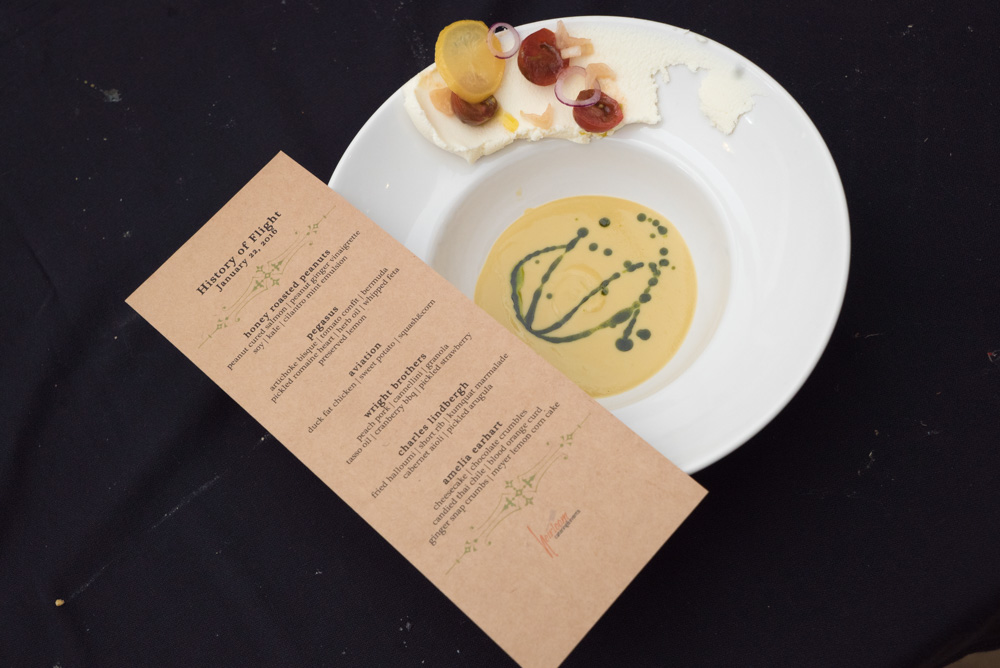 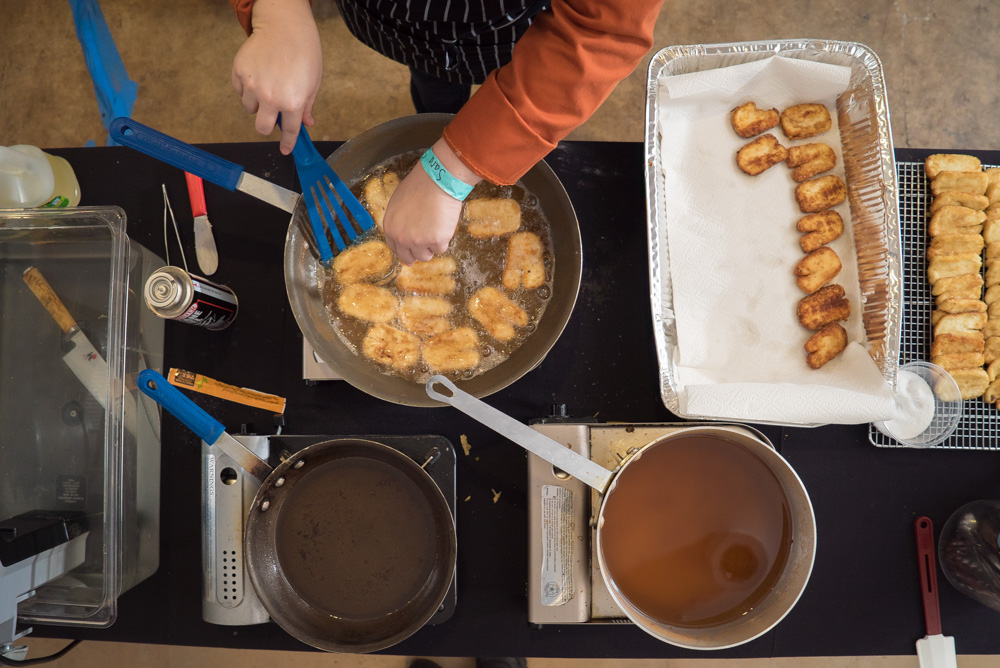 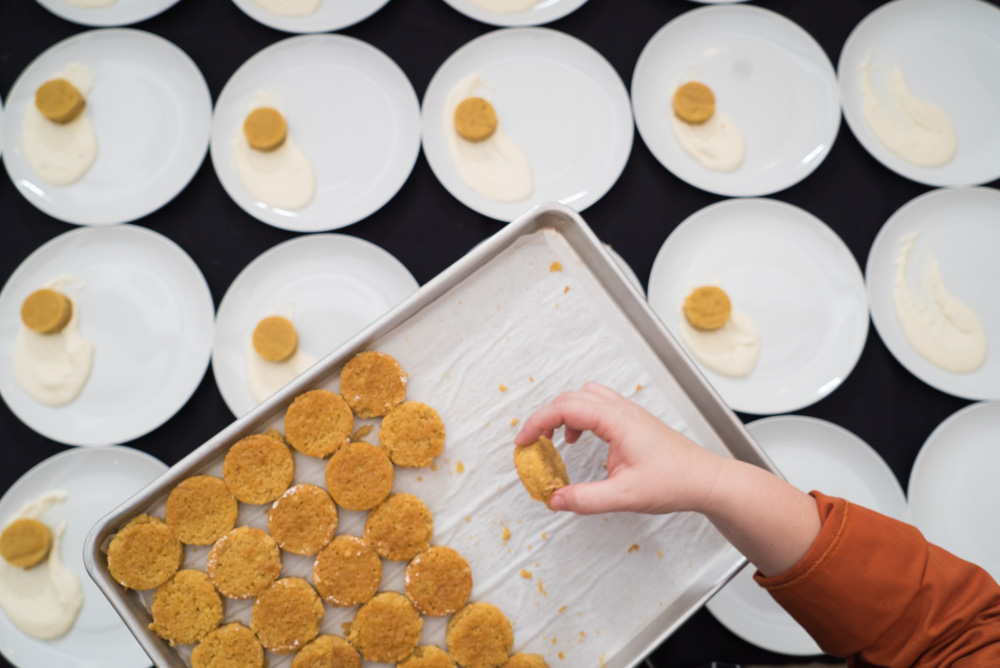 If Heirloom were a movie franchise, it would be : Indiana Jones

It may have started in 2012, but the husband and wife team behind Heirloom treat their dinners like the very definition of the word: “a valuable object that has belonged to a family for several generations.” You’ll find yourself transported to whatever world they choose to evoke, and you’ll be thrilled you got to go along for the ride.

I like old things – classic TV shows, clocks with hands, paper. I often wonder what it would have been like to experience past eras. So I was pretty jazzed to discover that the supper club I’d be attending in Houston was going to be held at the 1940 Air Terminal Museum, the original terminal building for Hobby Airport. Sounded like a treasure trove of old things. I hadn’t even noticed that the dinner was not simply billed as “Heirloom”, but rather as “the Heirloom experience”.

Husband and wife team Daniel and Sarah Millerhouse organize these evenings several times a year. Daniel brings the culinary skills, crafting a menu around what Sarah brings: the “experience” part. “He’s really got the harder job,” she grinned. “I get to pick where we do it and set the theme – he’s got to make the menu fit.” On the night I attended, the theme was flight. Having found the 1940 Air Terminal Museum amenable to their dinner party plans, Sarah had designed tablescapes to evoke a bygone age when air travel was an exotic good. Meanwhile, Daniel had the task of puzzling over how to marry aviation and sustenance in a way that did not make people think “airplane food”. 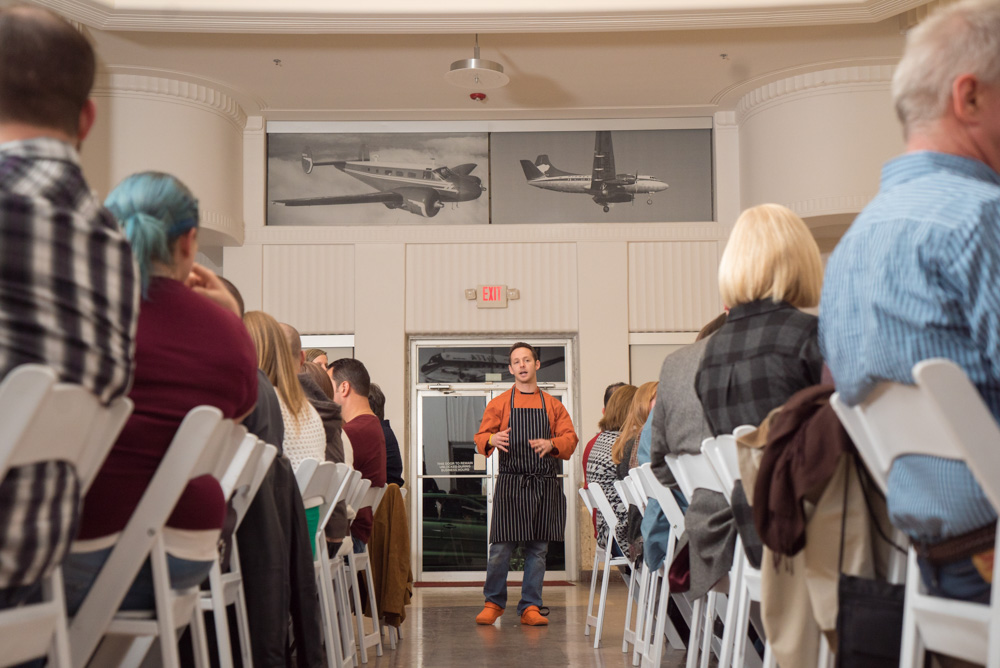 I nearly forgot I was there for the food at all when we first arrived. It was a scene out of time: waiters circulated with champagne and guests ambled around the Art Deco lobby, pausing over photos from the terminal’s brief practical existence. I found one of Humphrey Bogart, in his characteristic cross-legged slouch, apparently returning from some late 1940’s business in Houston. There were weathered posters for long-forgotten airlines (“Fly Braniff Airways to Peru!” urged a cartoon man in a poncho wrangling a smiling llama) and a yearbook with quotes from women who trained as pilots during World War II (sample text: “It scared the h— out of me!”) There was even a museum docent on hand, bursting to share his knowledge with the gathering crowd of off-hours visitors.

The names of the courses on the printed menus revealed Daniel to have found inspiration in flight-related concepts both mundane and grandiose. First up, “Honey Roasted Peanuts”, was not peanuts at all, but a succulent hunk of sushi-grade salmon that had been peanut cured and was served with a nutty tangle of kale salad and a swipe of cilantro mint emulsion. That last thing added a crucial element, an earthy note to balance the sweetness of the glaze on the fish.

After that, things got loftier (pun absolutely intended) with “Pegasus”, which Daniel introduced as “like a Greek salad that’s been turned into a soup.” Delicate artichoke bisque had been drizzled with a hieroglyph of garlic olive oil. A smear of whipped feta pasted confit tomatoes and a preserved lemon to the side of the vessel (one of those wide, deep bowls that makes whatever’s inside just taste better). At first sip the soup was quite mild, though I will never have a bad word to say about anything artichoke-based; but once you stirred in the feta, lemon and tomatoes, it became infinitely more complex. 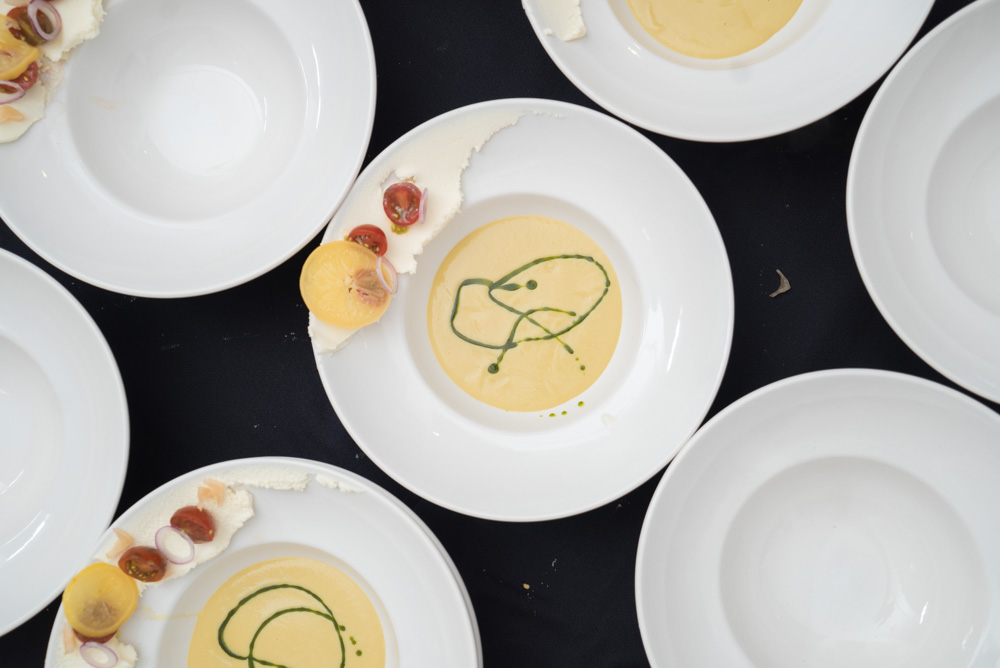 To a certain extent, this was true of most of the courses. If there was a culinary theme other than flight it was deconstruction. This was obvious with some of the dishes. Anyone could see that the chicken wing cooked in duck fat would taste even more delicious when paired with the feathery biscuit and squash butter on the plate. 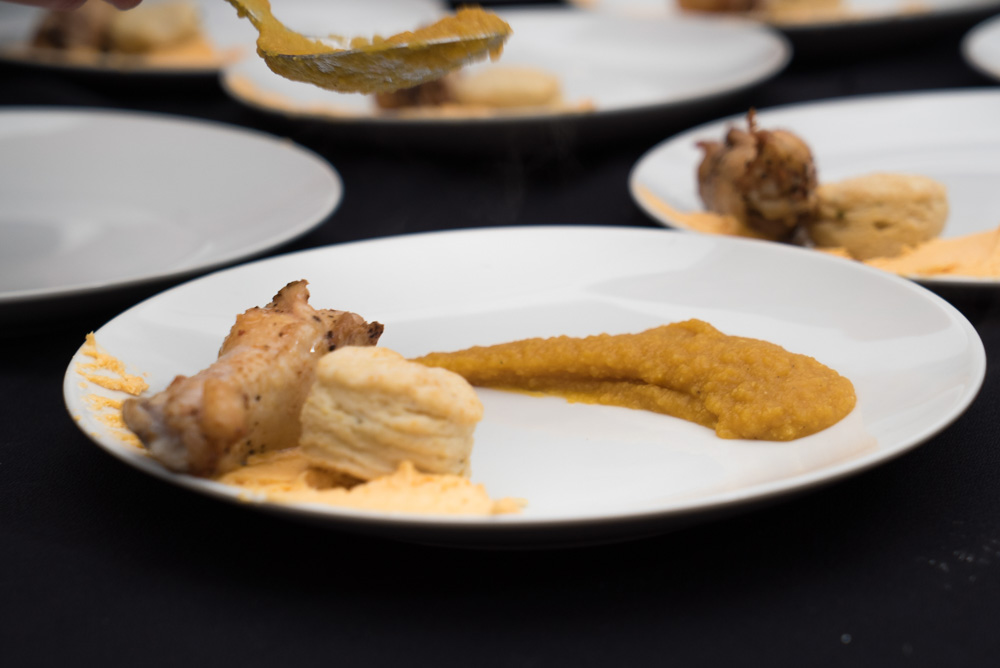 Other courses required more of a leap of faith. There were certainly some raised eyebrows at the granola, cranberry barbecue sauce and pickled strawberries accompanying a tender block of sous vide pork (“It may be pink inside, but I promise it’s cooked!” Daniel assured the crowd, with the half-smile of a chef who’s served one too many dry-meat enthusiasts). But any doubters became converts after composing a bite with all of those ingredients. The North Carolina BBQ joints from which Daniel took inspiration, riffing on the origins of the “Wright Brothers” for the course name, could only dream of such heady cuisine. 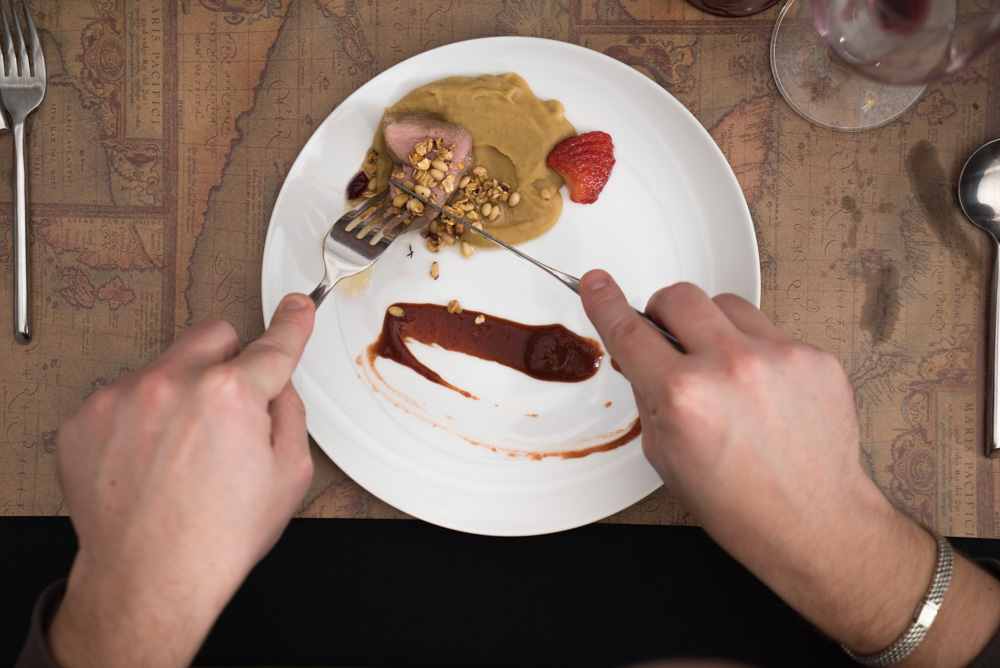 As the wine flowed freely, there grew to be a sense of the Bacchanalian about the meal. How fantastic commercial airline travel must have seemed 75 years ago. It was a realm for the rich and famous; now it’s an excuse to wear your Juicy Couture sweatsuit in public. The labor-intensive, painstakingly prepared food felt like a throwback to that glamorous age; Sarah had taken care to emphasize the point with antique globes of varying sizes as centerpieces, stacked on coffee-table books featuring exotic destinations. “Do kids even know what globes are anymore?” wondered a nearby guest. “No – they only have them in libraries,” the woman across from me pronounced, with rueful authority.

The final two courses, “Charles Lindbergh” and “Amelia Earhart”, had required a little research to tie together recipe and namesake. Daniel claimed Lindbergh refused to eat anything but sandwiches when he flew, and Earhart stuck to tomato juice. “I was going for a dessert based on tomato juice for a while,” he said, to the widened eyes of most of the guests, “aaand it just wasn’t happening. But then I found out that she loved cheesecake!” 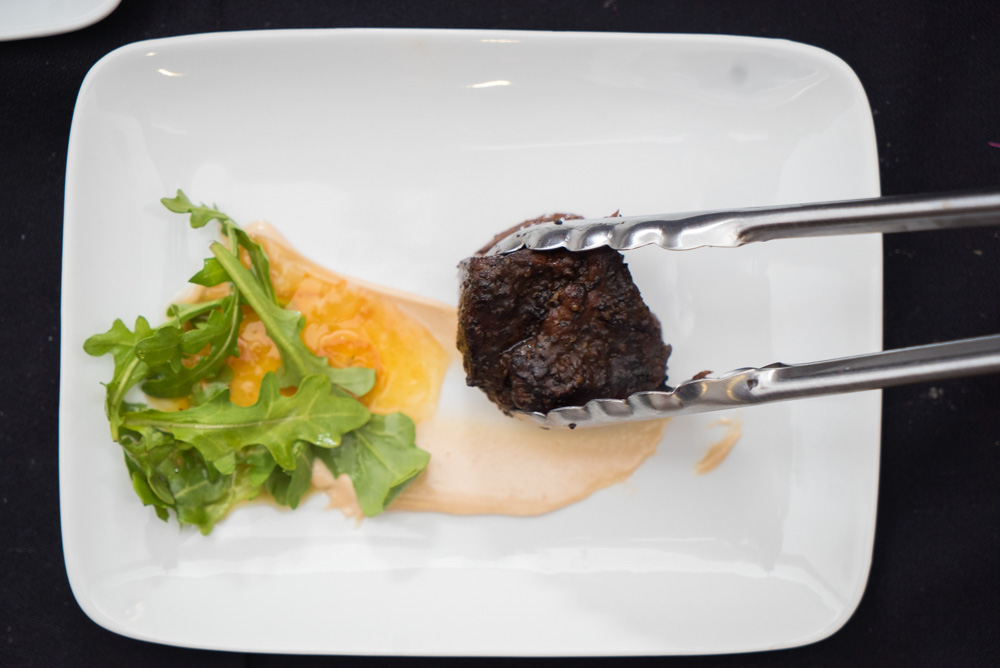 I was a big fan of the “Lindbergh sandwich”, made with halloumi cheese that had undergone a spa treatment (rinsed of its salty exterior, it had luxuriated in a milk bath overnight) and then been fried, providing both the bread and cheese component. This was accompanied by a decadent portion of short rib, some kumquat marmalade and a peppery knot of arugula “to cut the richness”, according to Daniel. That arugula had its work cut out for it.  “Oh good, someone’s using up our kumquats,” said the woman across the table, alerting me to Houston’s apparent surplus.

Earhart’s cheesecake was probably fancier than any she ever consumed, but also probably far more delicious. The dense corn “cake” paired nicely with the fluffy cream and crunchy chocolate bits. Smashed graham cracker stood in for the crust and the sprinkling of it on the plate had the texture of fine Hawaiian sand. Intentionally or not, it felt like the two highest-minded dishes of the evening were named after two of our literally highest-minded historical figures. Not including Snoop Dogg. 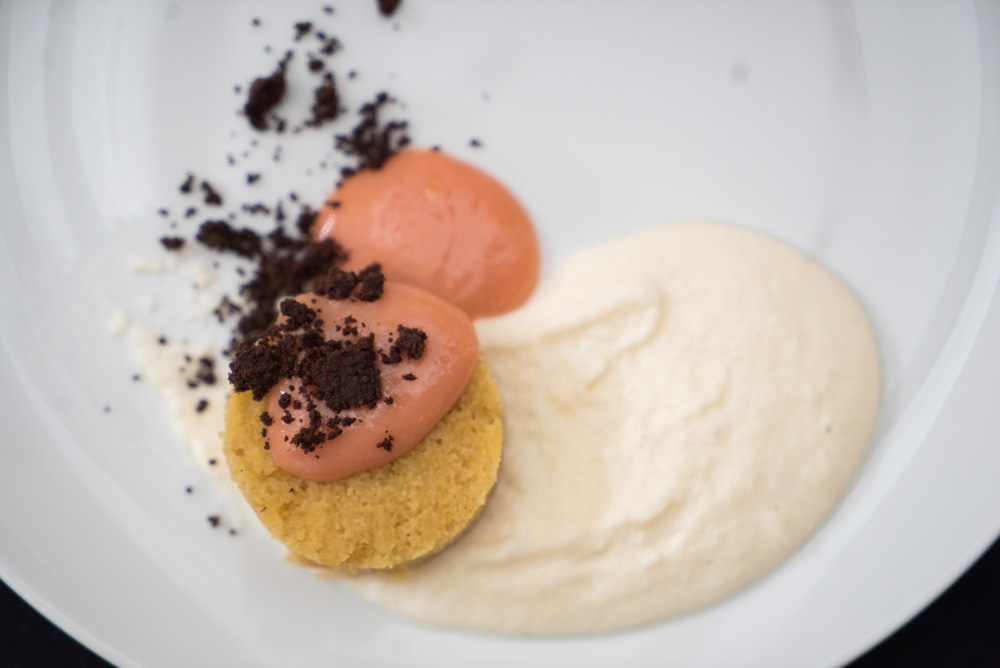 You can tell it’s been a great party when everyone’s reluctant to leave. “I didn’t even know this was here!” exclaimed one native Houstonian who was seeing a new side of her city. Now that she’d found it, she had intuited that there would never be a better moment to gaze upon the artifacts. I was reluctant to leave, too. The evening had captured the essence of early airline travel, how exciting and intrepid it felt. How those who flew at that time were participating in something unusual, exclusive, a bit dangerous. There wasn’t anything particularly dangerous about the meal, unless you’re counting calories; but when it comes to creating an experience, Heirloom has it down to a science.

From birthday celebrations to team gatherings, book a private dinner so your guests are the only ones at the table.

Design dinners to food tours, LA to London, check out our insights into other experiences within our network.

Get a taste for everything that’s coming up, either down the street or across the country.